“It will be no surprise that Russian supply risks and possible demand destruction are the main focus again. NBP and TTF moved higher at the start of the week as traders look for clarity on supplies from Gazprom and the pace of demand destruction in the region.”

“Given the energy crisis, it’s not surprising that we see some moves back to oil and coal in the short term. It’s all about keeping the lights on in Germany. European power producers have for years shifted away from burning fossil to cut emissions, but now they have to manage the gas situation, which is forcing their hand. Germany’s gas-storage facilities are about 65% full, well short of the 95%  target they set for 1st Nov.”

“We see across European energy markets impacting UK power and PPAs. We continue to see generators viewing recent moves up, as a fixing opportunity for longer-dated PPA contracts. In short to medium term, price volatility will present opportunities and risks for PPA pricing and renewable generators.” 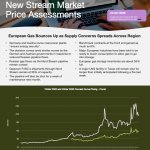