“Obviously, prices have fallen in recent weeks because of above-seasonal normal temperatures. This delay in the start of the heating season and strong liquefied natural gas flows have created a long supply versus demand balance system, and things have moved lower.

It’s still only November, but things look pretty comfortable right now, which is why we continue to see renewable generators looking
to hedge further along the price curve.

If this winter stays weak, then that market sentiment will probably lower the 2024 and 2025 PPA pricing.”

“We have seen a bounce in pricing at the front end on the back of the Freeport story and some lower temps. Probably some short cover from the speculative traders buying back positions which will also have supported things. But then the market moves down again on Wednesday.

The trend looks to be down, and until we see that broken, we still advocate hedging out future PPAs and GPAs. We have seen a move from renewable generators looking to fix out further than we have ever done before, with requests for pricing out to 2026.

I can see the rationale in terms of protecting downside risks. If this winter is a non-event, then likely the back end of the price curve, so 2024 and 2025 PPA pricing will  move down further.”

“Contracting PPAs continues to be challenging with some big price spreads between PPA off-takers, and market timing is again important. 2024 and 2025 fixings are taking longer to structure, so please bear that in mind.”

“The gas storage levels in Europe are now at a sufficient capacity to cover about eight weeks of winter demand.” 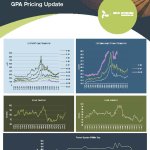